skip to main | skip to sidebar

BLACK COAL DUST AND WHITE, WHITE SNOW
I was born in Mohrland,Utah, but in 1938 the town was closed and the people moved to Hiawatha. More exactly East Hiawatha. I spent most of my adolescent years there. I am sure it was not the utopian small town that I like to remember, however it still has fond memories for myself and many people that lived there.
I have heard many stories about Hiawatha. The one most repeated, and so I presume the most correct is that Hiawatha came into existence because of some coal veins that were found on an old abandoned cattle ranch at the beginning of Miller Creek near the mountains south of Price, Utah. The coal was found about 1905/1907. I unterstand the town did not come into existence until about 1910.
Originally there were at least three small towns near each other. West Hiawatha, East Hiawatha and Black Hawk. Sometime around 1913/1915 the three towns were consolidated and the post office located at Hiawatha which became the official name of the town.
Hiawatha was a town of contrasts. Not like the big cities with their millionaires and poverty and mansions and hovels and teeming with tens of thousands of people. Hiawatha's contrasts were more suttle. The different nationalaties from many countries. Many different languages were spoken in the homes with the children usually being bilingual. One contrast I noticed when I was a young boy was my Father coming home from work in the winter. He would walk down a snowy, white road and he was covered with a black coal dust from head to toe. Only his eyes seemed to be devoid of the black dust. I always wondered how he kept his eyes clean.
In the winter the snow covered everything in snowy white billows that looked like cotton. Sometimes it piled up as deep as a car and the shoveling seemed to be a constant thing during the winter. The kids loved the puffs of white and played all kinds of games, such as fox and geese, snowball fights with snow forts and just lying on the ground flapping our arms to make snow angels.
The contrast to the white fluffy snow was the black coal dust or "slack." This of course was transferred to your car, your cloths, your feet and your house. It was impossible to keep it out or off, but not many complained because "Coal was King."
I mentioned earlier the many different nationalities in Hiawatha. It is interesting to note, because there were parts of the town that reinforced the different nationalities as well as different locations in town. There was Greek Town, Jap Town, West Hiawatha, East Hiawatha, Flat Town, Tram Town, String Town, Railroad Town, Silk Stocking Row and what became known as Uptown where the store, post office, mine office, hotel, amusement hall,school and Doctor's office were located. During WWII the apartments (known asThe Project) were built below the town.
My Father worked at the "weigh shack" at Hiawatha and there were days he would come home and tell us there were one hundred rail cars of coal left Hiawatha that day. The average car being forty to fifty tons. That was quite a contrast to a few years before when drill holes in the mine were hand made, the coal was blasted and loaded into mine cars by hand and hauled to the portal by horses.
Unlike many of the "Coal Camps" in the area, Hiawatha had all of the facilities for Entertainment, Church, School Activities, Doctor Services and a company owned Store and Service Station.
I left Hiawatha in Jan 1951and came back for a short time in 1954/55. Many started leaving Hiawatha in the 1970's & 1980's and as they left the houses fell into disrepair and were vandalized so most of them were finally bulldozed and leveled to the ground.
On Friday, April 19, 1991 the mine was closed and Hiawatha no longer existed. The mine is again being operated as a private coal mine however Hiawatha is listed as a ghost town in a book about ghost towns in Utah.
Posted by berttude1 at 12:46 PM No comments: 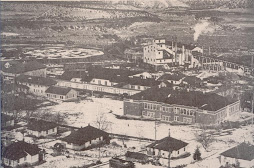 This is our home away from home.Built in 1990 by the family.This is our link to sanity when we want to get away from it all. It sits at 9000 ft. elevation so it is beautiful in the summer but almost covered with snow in the winter.

This Statue stood in Hiawatha, Utah for many years. It is now located in Price, Utah in the Peace Garden.(CLICK THE STATUE)

The Baldwin Surname was recorded in England as early as 1200 and was also recorded in the USA at an early date. I have over 117,000 connected names in my World Connect Web site. (CLICK THE CREST)